Treo Phone – The Palm Treo is a discontinued line of smartphones initially developed by Handspring, which Palm, Inc bought. Later they were manufactured and maintained by Palm, Inc. Treos had many features, such as the ability to check the calendar while talking on the phone, dial directly from a list of contacts, and send email messages.

The final models included a built-in camera. Treos ran Palm OS, but later models also ran Windows Mobile. The Palm Pre, released in June 2009, replaced the Treo series. It was one of the first smartphones one should have to look stylish. The first smartphone to have a keyboard and a screen, although it was a monochrome screen, was Treo 180. The Treo 300 became available on Sprint in August 2002 and became popular. 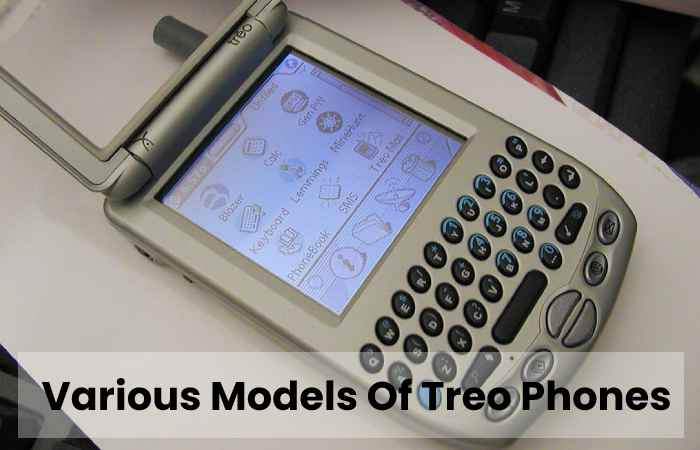 A total of nineteen Treo models were released. Treo 680 series devices used Palm OS. In the 700 series, Treos ran both Palm OS and Windows Mobile. The Treo 700p was the first of the 700 lines and the first Treo to use Windows Mobile.

The Treo 300 was the first & a beautiful phone of its time. It was a colored screen (though it had only displayed 256 colors) and a QWERTY layout keyboard device. Treo 300 was good for getting corporate emails and Internet surfing with a browser named Blazer. It was running the Palm OS operating system, which was relatively slow, but it sold well and brought a lot of new customers to Sprint.

In October 2003, Handspring released Treo 600 model. They improved the battery life from the Treo 300, the screen was brighter, the phone consisted of a VGA camera with an SDIO slot, and the keyboard was more cramped together, even though that made typing a little more complicated.

In 2004, Palm finally bought the Treo rights and released the Treo 650 model. With this model, Palm brought in a high resolution 320 x 320 screen (considered a lot for the time) and improved the keyboard. Many loved the Palm OS smartphone but wished for a Windows Mobile Treo. Their wishes eventually became true.

In 2006, Verizon was the first to receive the Palm Treo Windows Mobile edition. The 240 x 240-pixel screen was a big turnoff, but Windows Mobile started working flawlessly on the Treo 700w. Palm later insisted that the Treo 700w didn’t spell the end for Palm OS Treo smartphones.

The best among Treo was the Treo 700p, an advanced Palm OS smartphone (released in April of 2006) that not only had a high resolution 320 x 320 screen but ran on Sprint and Verizon’s extended EVDO high-speed networks. The Treo 700p model was much faster than previous versions of the Treo. It was also the first Treo in which you could feel comfortable playing and streaming videos.

The following GSM and CDMA2000 mobile phone operators currently or previously offered a custom-branded (OEM) version of the Treo 650:

As seen on Palm’s support page, these carriers are the sole providers of support for the OEM phones.

Latest Editions Of The Treo Phones

Two special editions of the Treo 650, the first a “special color edition” released in 2006 with a spare battery and PalmOne 256MB Card. This edition targeted the Japanese market with extra Language functionality in the preferences menu.The second was named the “Black tie” limited edition targeting the Asia/Pacific region, released in 2006 and limited to 2000 units, a black Silicone coated device celebrating ten years of Palm. These also carried the “Palm” instead of the “PalmOne” logo. The “Black Tie” came with a “multi-function” stylus and a Hard case.

Both, however, had identical hardware functionality to the original.

End of the Treo Phone Era

By the end of 2007, the brand Treo phone became irrelevant due to the release of the iPhone. However, Palm still released the Palm Centro in September 2007 and the last model Palm Treo Pro in August 2008.

Although we have provided you with information on Treo Phone; nevertheless, if you’re curious to learn more about Treo Phone, you can read the following articles:

The Palm Treo phones are Palm OS-based smartphones that are introduced to the world. The Palm released a range of smartphones with some updates and additional features to compete in the market until 2008 when the last Treo phone was released.

[what is a treo phone]

[how to do a hard button reset on palm treo phone]

[palm treo phone that came with a pen]

[how to transfer files out of treo phone]

[how to connect to service provider- palm treo phone]

[how to recover deleted photos an old sprint treo phone]

[how to remove sim card from palm treo phone]

In PC World, 1 month ago